If you happen to be near the beach in North Carolina’s Outerbanks at the right time, you might just spot some horses. These aren’t animals kept on some local farm, they are wild horses that freely roam the area.

When Hurricane Dorian was approaching the area, the horses huddled together and used a trick that horses have used for centuries. It has allowed them to successfully weather those storms.

There are oak trees on higher ground and the horses will move to that area to seek shelter according to the Corolla Wild Horse Fund that cares for the herd. “They’ll likely ride out winds and rain as their ancestors did before them – in huddles, butts to the wind,” a message sent before the storm reads.

Many humans that live in the Outer Banks are not as prepared as the should be for the storms but that isn’t true of horses. They can detect a change in the pressure and begin to gather in groups. 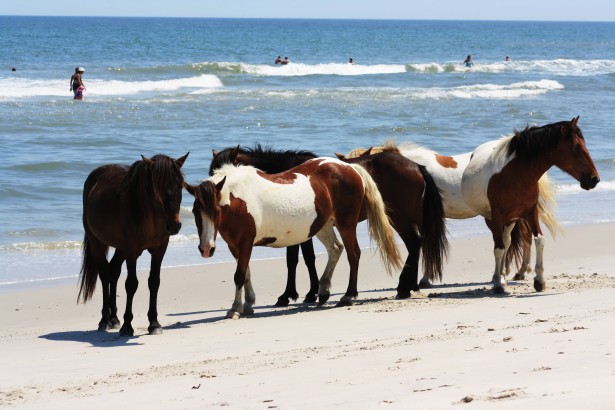 The Fund reminds us that they have been doing this for 500 years!

The farm where they find refuge at times was stocked with various supplies, including food and water.

They had plenty of grain and hay and the water troughs were filled. ID tags were braided into their manes and the manager of the wild herd stayed at the farm during the storm in case there were problems.

The Ocracoke ponies are all safe and accounted for! Thanks for the update, Outer Banks Forever. If you’d like to help…

When Hurricane Dorian hit the coast in North Carolina, it was a category 1 storm. It had passed through the Bahamas a week earlier as a strong category 5 hurricane and left destruction and at least 45 people dead in those islands.