Blue Whales are the largest mammals on earth, but even their massive size cannot protect them from the spears of unscrupulous hunters.

The carcass of a Blue Whale photographed on a dock in Iceland, taken by Germany-based marine conservation group Hard to Port and Sea Shepherd, has brought that fact into sharp contrast. It’s been at least four decades since a Blue Whale was last killed. On July 8, that clock was reset to zero, prompting whale advocates across the world to call for action.

Blue Whales are protected under Icelandic law, and capturing a Blue Whale is illegal. According to the Telegraph, however, the whale’s killers claim that their catch was in fact a Fin Whale, or at the least, a rare Fin and Blue Whale hybrid. 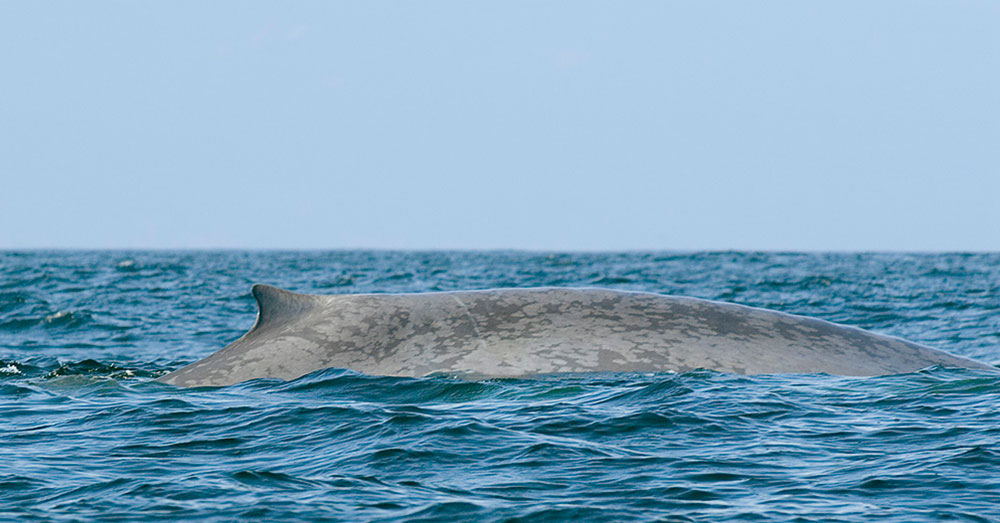 While these whales are equally endangered, hunting Fin Whale is not categorically outlawed in Iceland.

“This whale, when you see it swimming in the ocean, it was like a fin whale,” Kristján Loftsson, CEO of Hvalur hf whaling company, told the Independent. “There were no characteristics of a blue whale, it is very easy to tell a blue whale in the ocean. 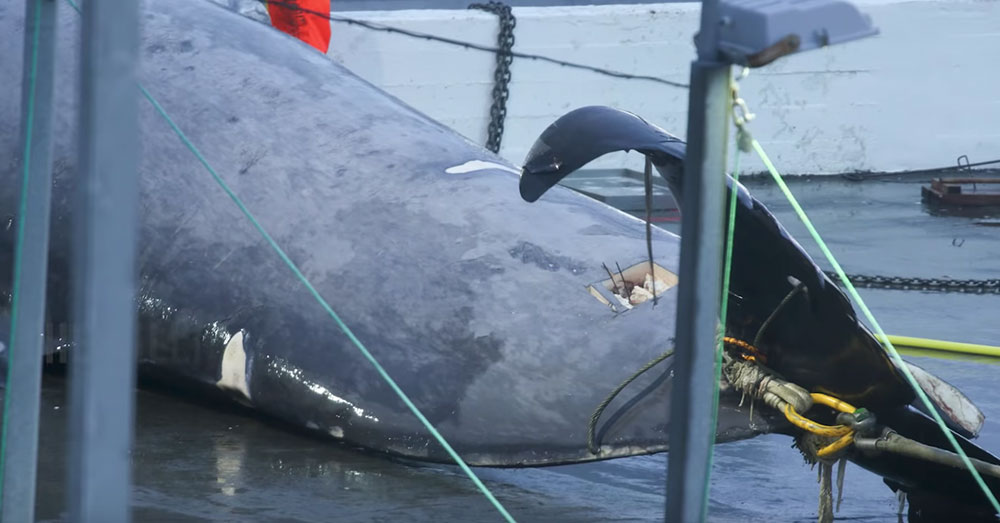 But not everyone shares this confidence.

According to Dr Peter Richardson, Head of Ocean Recovery at the Marine Conservation Society, the animal is indeed a Blue Whale, “The largest animal ever to grace our planet, endangered and protected under all relevant international agreements.”

“We urge the UK Government, who have historically led global whale conservation efforts, to send the strongest objections to Iceland about the killing of this iconic species,” Richardson said. 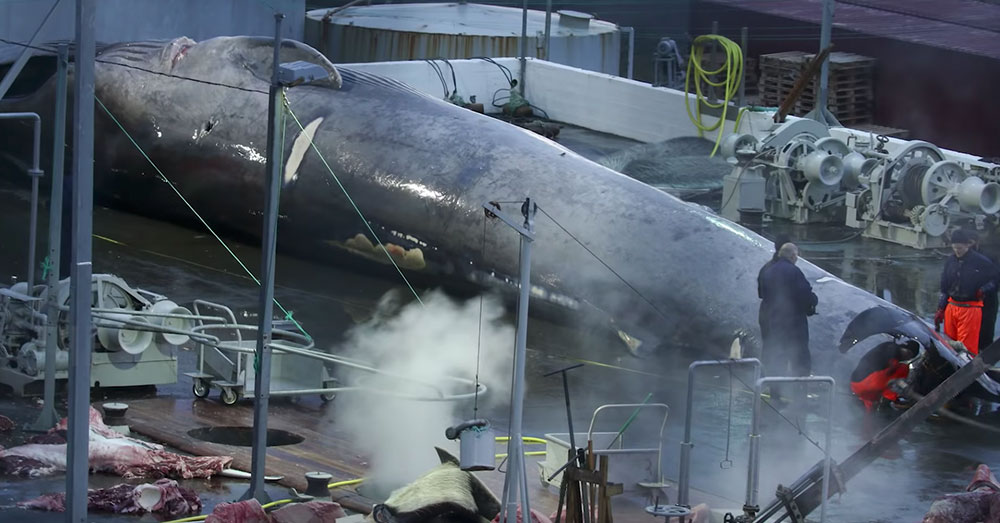 NOAA Alaska Fisheries Science Centre’s Dr Phillip Clapham agrees, for the most part, maintaining that there is little evidence the whale is a hybrid, though he notes the possibility cannot be ruled out.

“From the photos, it has all the characteristics of a blue whale; given that – notably the coloration pattern – there is almost no possibility that an experienced observer would have misidentified it as anything else at sea,” Clapham said. 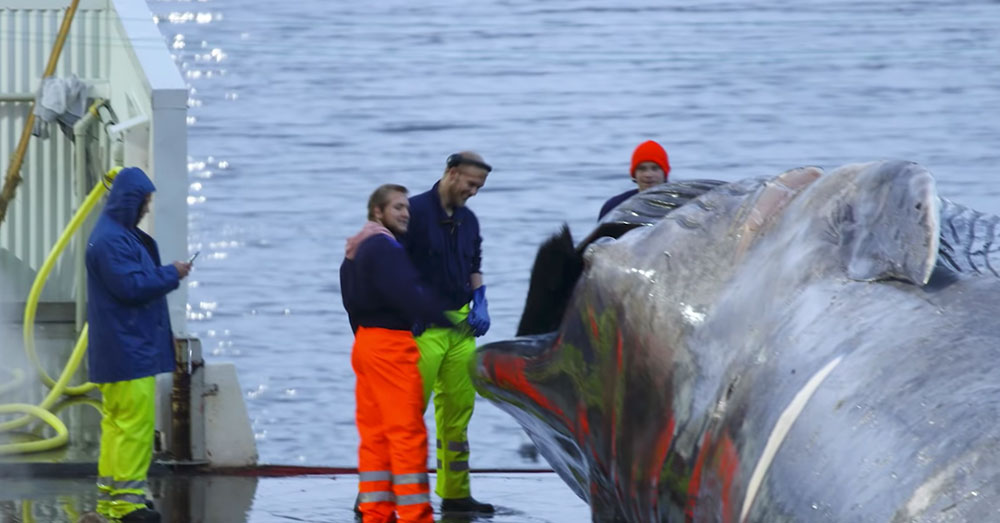 Adam A. Pack, researcher and professor of biology at the University of Hawaii at Hilo, told CNN that the lack of a white lip and distinct coloration on the whale’s sides is more characteristic of a Blue Whale than a Fin.

“(Look at) the way the dorsal fin is hooked, the pointed pectoral fins, and the size of the animal,” he said. 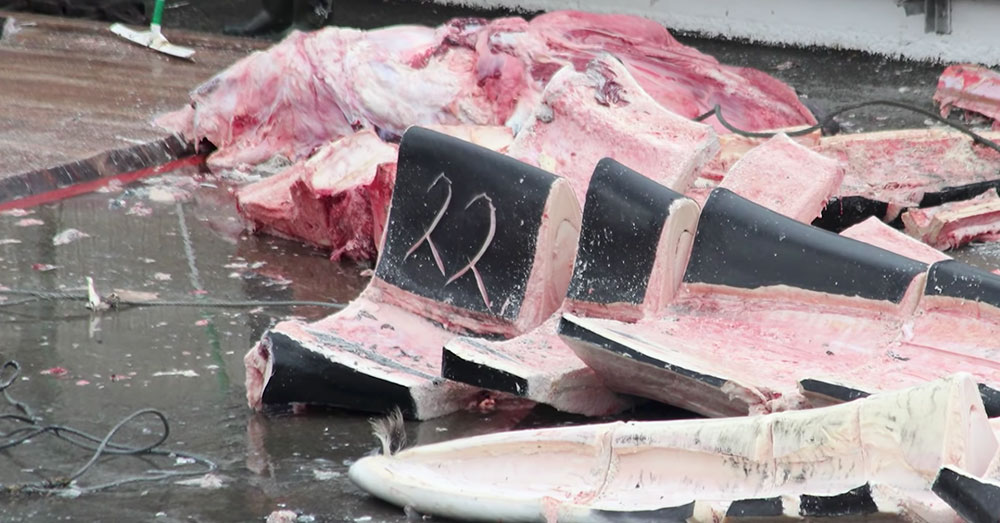 Source: YouTube/Sea Shepherd
Whale meat is chopped up on the dock.

Loftsson claims that most Icelanders are in support of whaling, and yet defends his fishermen as capable of discerning Blue Whales from others. They’ve killed 21 confirmed Fin Whales so far this year since the whaling season began on June 20. The most recent could mark 22, which counts against Hvalur’s yearly quota of 151.

“We have never caught a blue whale in our waters since they were protected,” Loftsson told CNN. “We see them in the ocean. When you approach a blue whale, it’s so distinct that you leave it alone.”