Rescued Sea Turtle Didn’t Want To Leave Her Rescuers, So She Did This…

Sasha, a gorgeous sea turtle, unfortunately had a rough meeting with some fishing lines and got tangled. Luckily, Sasha was found by some local fishermen in Kenya. YAY! Poor thing wouldn’t have survived much longer! Phew. The fishermen noticed she was injured and brought her to Local Ocean Trust: Watamu Turtle Watch, where she was given LOTS of love and care.

Once her caregivers felt she was ready, Sasha was released back into the ocean. But something happened! She was having some issues swimming and knew exactly what to do to fix that: She swam back to the people she trusted most to help her! How incredible is that?! 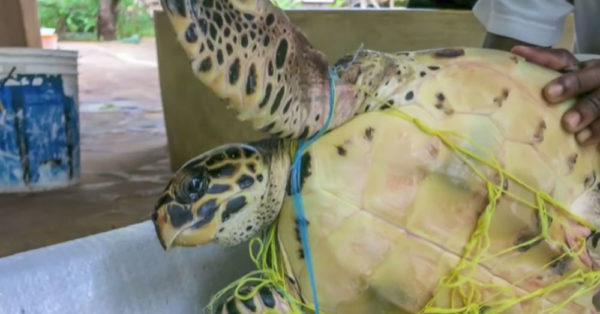 Rescued animals are very smart. Most of them know they are in good hands, once they realize they can trust their rescuers. Some people don’t give animals enough credit. They have real emotions and attachments… just like we do!

Rescued animals are very smart. Most of them know they are in good hands, once they realize they can trust their rescuers. Some people don’t give animals enough credit. They have real emotions and attachments… just like we do!

You can donate your time! Lots of shelters and rescue groups are short handed and would LOVE to have some help. Don’t be shy, just look ’em up online and call them.

Think about donating things from around your house like old towels and blankets or even pet toys that weren’t used.

If you can, pick up an extra bag of pet food when you go food shopping. I look for sales, especially those buy one, get the second bag half off. Then, bring that extra bag to a local shelter.

The list goes on and on. And here are some more fantabulous ways to help:

You go, you animal rescuer superhero!

Julie Hunt Julie resides in Northern New Jersey with her two kids, two dogs, cat and partner. She has two published books which make excellent trivets if you aren't a fan of poetry. She tolerates people but LOVES animals. If she isn't blogging, she's most likely cuddling with her pups, Paisley and Skyler.
Proper greatergood_ctg_belowcontent
Proper greatergood_ctg_footboard