Scientists have been left stunned after one salamander hasn’t left the same spot in over 7 years! Imagine being stationary for a whole 7 years – that’s got to be one crick in the neck.

As New Scientist reports, the really rare cave olm has left scientists completely surprised as he has refused to move from the same spot on a rock in Bosnia Herzegovinian for at least 2,569 days. The little cave olm isn’t that little, as the animal is a least a foot-long and can live more than 100 years – no wonder he hasn’t moved, he’s got time.

While this little guy seems unusually chill, according to a report by the Journal of Zoology, these animals are no strangers to minimal movement. That study found that these animals are actually quite sedentary, and will generally move less than 30 feet over the span of a decade.

However, this particular salamander has definitely taken the slow movement to a whole new level. He hasn’t moved in literally years. Researchers were monitoring the movement of 19 different olms in Herzegovinian caves over a period of 8 years. 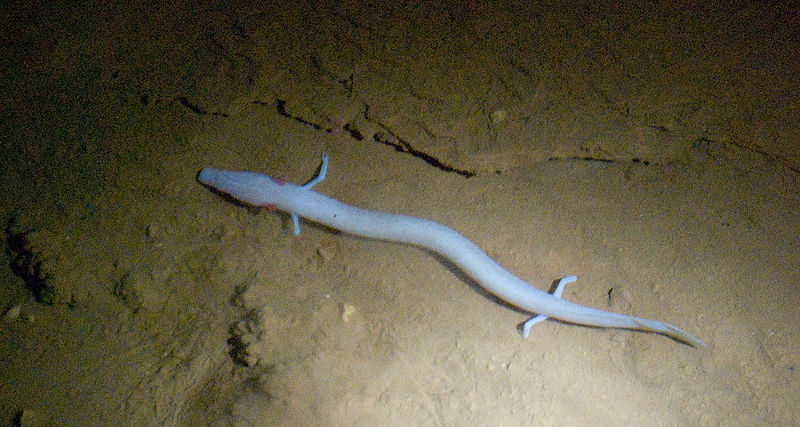 The lead researcher with Eötvös Loránd University in Budapest in Hungary, Gergely Balázs, spoke to New Scientist and said, “They are hanging around, doing almost nothing.”

As it turns out, these amphibians are really only motivated to move around in order to mate – something they generally do once every 12 years. Sounds like a lonely life. In addition, according to Newsweek, olms are blind, have no predators, and have the capacity to go without food for several years.

Balázs and his team used a “capture-mark-recapture” technique in order to monitor the animals’ movements, that’s how they know that this little guy hasn’t moved in 7 years. What do you think of this olm?