If you think baby owls are adorable enough to warrant a minute or more of scrolling through their cuddly cuteness, just wait until you see how they sleep.

You’ll want to block off some time to look into this curious phenomenon.

What seemed like a one-off photo opportunity of an owlet with its face in the sand turned into much more when millions of non-owl experts on the internet realized that this is how young owls actually sleep.

According to IFL Science, the buzz was first generated by Twitter user Mark Rees,

“I’ve just discovered that baby owls sleep face down like THIS because their heads are too heavy,” Rees wrote. “Also, I don’t think I’ve seen owl legs before….”

I've just discovered that baby owls sleep face down like THIS because their heads are too heavy. Also, I don't think I've seen owl legs before.... pic.twitter.com/dfKii2JtS8

“Looks like a toddler in an owl costume having a tantrum,” replied “Computer Scientist and Director of Teaching and Learning” Dr. Chris Headleand

As it turns out, juvenile owls most often sleep face-down because their heads are too heavy for their developing muscles to hold up. Once they’ve grown stronger they will sleep upright like mom and dad.

I've been trying to find the original photographer for this image, but no luck. It's obviously a captive bird. Regardless, yes, young nestling owls do sleep, or rest lying down. Their heads are too heavy for their bodies. Here are some saw-whets from my Ph.D. research 🙂 pic.twitter.com/9xQ2SA1IPI

After finding a pair of barred owlets under a large sugar maple tree near his east Connecticut home, Joseph Clark called BirdNote to share his story. The owlets were being harried by ravens. Clark shooed the ravens away and consulted with local bird experts on what to do next. They told him to watch the owlets as they slept during the day, making sure the ravens didn’t come back and try again.

He was surprised and delighted at what he saw. 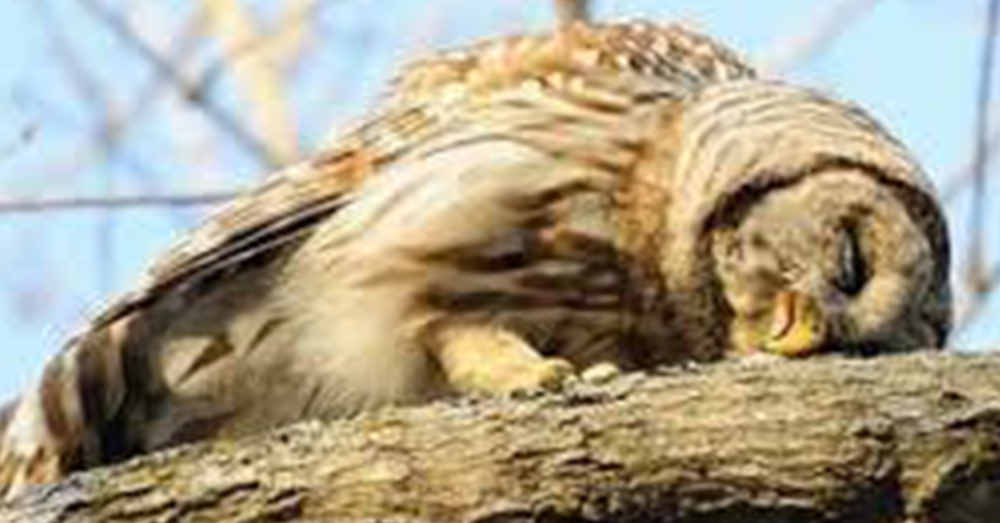 Source: Mika McKinnon
Owls clamp their talons onto a branch when they sleep.

Owlets take short naps and they do not like being disturbed from their slumber, but while they are asleep, something fascinating happens.

“Keeping their talons tightly gripped on a branch, a Barred Owlet will sometimes lie down on its stomach, turn its head to the side, and fall asleep,” Birdnote reports. “A young owl doesn’t fall out of the tree while it snoozes, because its back toe, the hallux, holds onto the branch. The hallux will not open or let go until the bird straightens its leg.” 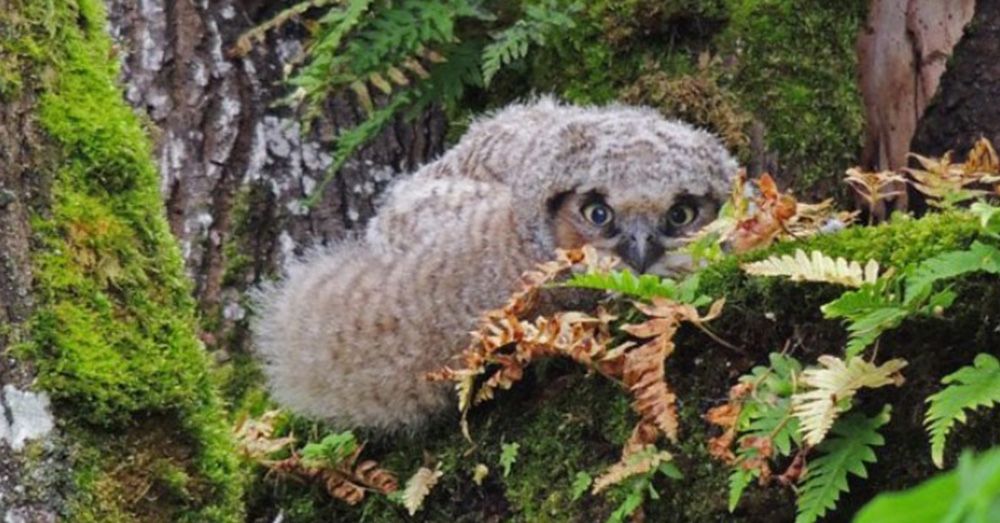 You learn something new every day!

Bears Return To Brooks River, Ready For A Summer Of Fattening Up: Click “Next” below!