If you’ve never had the opportunity to see humpback whales in the ocean, you really are missing out on a treat. They can be seen in many areas, including in the Pacific Northwest, where they were seen doing something never seen before. They were using their fins to direct salmon into their mouths.

A drone managed to film this unusual feeding strategy. They used it along with other hunting strategies, including encircling the fish with a screen of bubbles, blocking the sense of sight of any fish within the circle.

It’s unclear if humpback whales use this technique elsewhere, but it does show their adaptability in the wild.

Sailors and scientists have been amazed at what whales are able to do for many years. Even though they have been studied extensively, it seems as if they still have a surprise or two up their sleeve. Madison Kosma is a master fishery student who spoke with National Geographic on the subject.

Young salmon are released into the ocean along the eastern shore of the Baranof Island in Alaska by Hidden Falls Hatchery. It seems as if whales have gotten wise to the release and are now arriving at the right time to grab a quick snack.

Video drones were used by Kosma and other members of the research team to review their feeding habits. They ended up capturing something that Kosma says had only been considered possible before, “corralling fish with their flippers.” 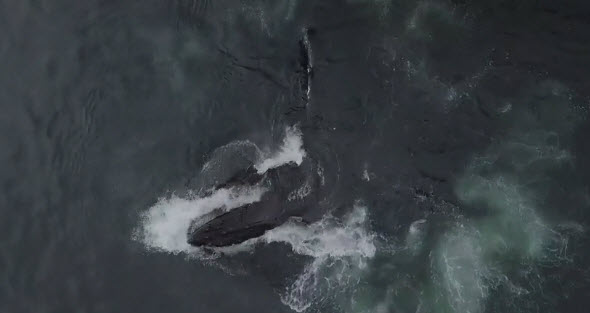 Kosa told National Geographic, “Thanks to the unique situation at the hatchery, and thanks to new technologies such as drones, we were actually able to document it.” They had seen it happening in person a number of times before but now they had video proof.

The whales would swim to the school of salmon, put a screen of bubbles around them, turn onto its back, and then heard the fish into their open mouth using their large fins.

The salmon from the hatchery have not yet developed the schooling abilities of an older fish, so if the whale were to simply lunge at them, they would probably dart in different directions. Wild salmon that are older will be more predictable and the whales may find them easier to feed on.

Some members of the research team used 11-foot poles to see the animals feeding near the hatchery pens.