Penny Bielich, a British diver, had a once in a lifetime encounter with the rare megamouth shark off of the coast of Indonesia’s Gili Lawa Laut Islands—a popular tourist and diving attraction. Bielich pulled her camera out and started recording the rare sea creature quietly gliding through the water.

Very little is known about the megamouth shark. Since its discovery in 1976 off the coast of Oahu, the megamouth shark has been sighted fewer than 100 times—with 63 of those sightings confirmed by The International Union for the Conservation of Nature. 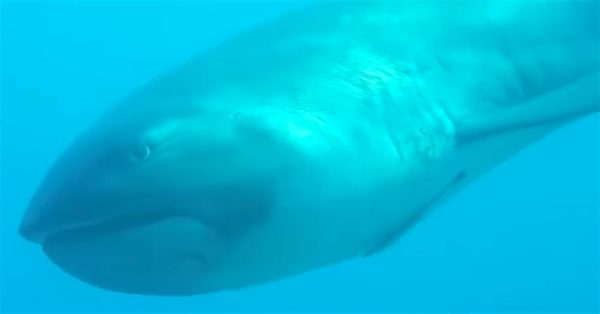 What scientists do know is that the megamouth shark is a planktivore, meaning it only feeds on planktonic food, including zooplankton or phytoplankton. They spend most of their time swimming with their mouths wide open, filtering for plankton.

Other planktivorous sharks include the basking shark and the whale shark. Like their cousins, the megamouth shark have a softer set body and have snout-shaped heads. Megamouth sharks are also poor swimmers—posing no real threat to humans.

With the very few confirmed megamouth sitings, primarily near China, Taiwan, and Japan, it has been established that they are distributed throughout the Atlantic, Pacific, and Indian oceans. For their wide range in distribution, they are listed as an animal of the “least concern” by the IUCN. Until further research is done on the megamouth sharks, the IUCN cannot determine if this species of shark is in any actual danger or if they are really amazingly elusive from humans. For now, the megamouth remains a mystery and to many – that’s a good thing.

Luckily for us, Penny Bielich was able to capture this magnificent sea creature on film and was able to share it with the world. To see the full encounter, watch Penny’s video below!

Mitchell Canh is a West Michigan resident and enjoys exploring the great outdoors. He lives by the Vietnamese proverb and his family's motto: "The good leaves protect the worn-out leaves." He hopes to protect the Earth and its inhabitants from climate change and pollution.
Whizzco