We’ve all been hearing about the historic bushfires that are currently plaguing Australia. The fires have been devastating the local habitat, leaving lots of wildlife injured or deceased – particularly the poor koalas.

As the blazes continue to surge, locals have been rallying together to help the dozens of injured and dehydrated animals that are popping up all along the Australian east coast. One of the ways that they’ve been helping the suffering animals, is by creating both mittens and little pouches for marsupials to cuddle in.
Because of the wildfires, wildlife hospitals have been inundated with animals, and as a result, are struggling to keep up with the demand for supplies.

As the organizer of the operation, Nicole Blums, said to ABC Radio Brisbane, “If it’s an animal that’s lived in the bush they’re ending up in wildlife hospitals at the moment. Reptiles, koalas, joeys, snakes are all being found by people either trying to escape the fires or being caught in them.”

Some of the particularly crafter locals have been knitting things like mittens and pouches for the rescued koalas and marsupials.

Blums added, “We have had people knitting koala mittens for burnt pads and sewing pouches for marsupials. People are so passionate to help the animals, they want to save our national emblems and they want to do whatever they can to help.” 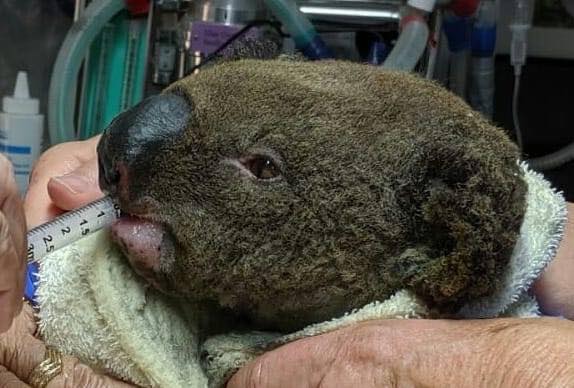 The International Fund for Animal Welfare (IFAW) has explained they are no longer appealing for mittens since there have been so many kind individuals who stepped up to the plate and provided them with loads of knitted goods. However, they still need plenty of monetary donations for medical supplies if you are looking to get involved.

WILDLIFE DONATION UPDATE!WHOLEY BATMAN YOU GUYS ARE AMAZING! WE ARE ALREADY ALMOST FULL IN MANY LOCATIONS. Nicole…

Posted by The Rescue Collective on Saturday, November 9, 2019

There have been many animals suffering from smoke inhalation and dehydration, and unfortunately, Blums admitted that the devastation is “only just started.”

Blums stated, “There are many areas that no-one can get into at the moment – people are finding animals on the side of the road or in the homes as they’re fleeing out of the bush. We’re getting them the supplies they need but we do know this is the tip of the iceberg and the worse is yet to come.”

According to Blums, so far, more than $75,000 has been given to the koala hospitals in the state. The Rescue Collective has also received a lot of interest from over 1,000 people who want to help the wildlife hospitals deal with the major influx of injured animals.

🔥WILDLIFE EMERGENCY🔥-WE NEED YOUR HELP- Over 70 fires burning in NSW & again we need your help! This time, we’re…

Posted by The Rescue Collective on Wednesday, October 30, 2019

Blums pointed out the hospital staff are “vital to helping get the animals back on their feet,” therefore every little bit of support is welcomed.

Once the fires start to calm down, Rescue Collective has plans to help support the carers who are out in the field rescuing animals.