Who has two big eyes, an even bigger heart, and a sense of thankfulness that’s been making millions swoon? GiGi, the great horned owl, that’s hoo!

GiGi first arrived at Wild at Heart Rescue in late May with significant head trauma after being hit by a car. Wild at Heart founder Missy Dubuisson said GiGi “was one of the most critical we have ever taken care of. The fact that this bird has lived is beyond comprehension.” 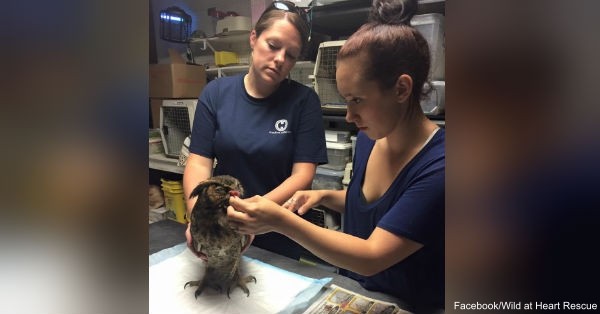 As GiGi started to recover, images of her and Wild at Heart President Douglas “Doug” Pojeky began to circulate. The two had developed a bond.

Pojeky left the rescue for a few days to visit family in Michigan. When he returned, and the two made eye contact, GiGi began bobbing up and down. The wounded owl approached Pojeky, nuzzled her head into his neck, wrapped its wings around him, and the two shared a warm embrace.

Doug was checking on his little patient, and this is what happened. She threw both wings around him and gave him an owl hug.

“There are truly no words to describe what happens here between Doug and these birds of prey,” Wild at Heart posted on Facebook. “It’s like they communicate. And I actually don’t think anybody in this world has a relationship with birds of prey like he does.” 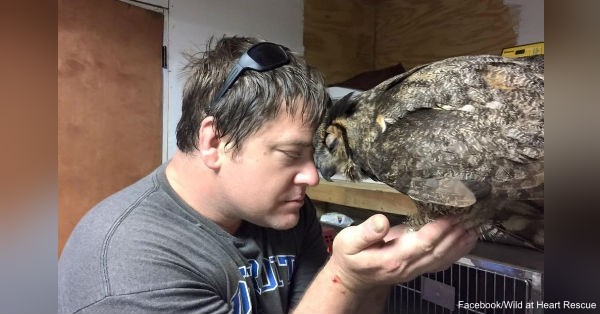 GiGi’s recovery has progressed nicely, but Canada’s burrowing owl is in trouble. Several factors are contributing to this species’ loss of life, including habitat erosion due to human interference, predators, and poison from consuming other animals that have been poisoned. Because of these habitat intrusions, the burrowing owl is endangered. Follow this link and sign the petition urging the Nature Conservancy of Canada to continue to encourage the proliferation of Canada’s beautiful burrowing owl. Matthew Russell is a West Michigan native and world traveler with a background in journalism, graphic design, and French pastry. He likes to learn new things whenever possible, and enjoys bicycling, going to the dog park, folk music and coffee.
Proper greatergood_ctg_belowcontent
Proper greatergood_ctg_footboard