For Shark Month: Save Sharks from Becoming Shark Fin Soup

July is Shark Month, an exciting time to celebrate the beautiful blue creatures that roam our oceans. Sharks are important because they make sure the entire marine food chain runs properly. Without them, our oceans would look much different – for the worse.

However, sharks are in danger. Fishermen kill around 100 million sharks every year (source: Journal Marine Policy, 2013). Most of these sharks die because their fins are the essential ingredient in an expensive Asian dish called shark fin soup. 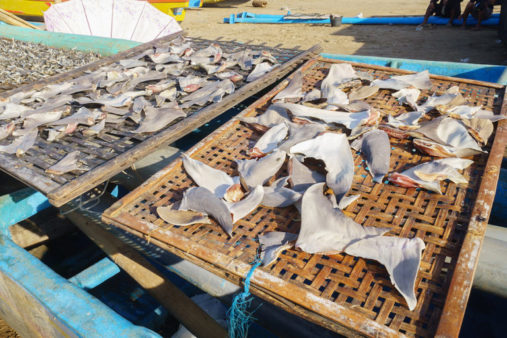 That’s where YOU come in. Project Peril, a Signature Program of GreaterGood.org, is working with the best wildlife organizations to bust shark fin crime networks, and we need your help.

Just one year ago, Wildlife Conservation Society (WCS) – one of our Project Peril partners – saved two whale sharks being held captive underwater in Indonesia. If not for WCS, these poor sharks would have ended up in China and other parts of Southeast Asia. Their fins would be chopped from their bodies and made into shark fin soup, while their bodies would be thrown aside to rot.

Instead, WCS rescued and released the whale sharks and arrested the wildlife criminals. Healthy and happy, these two sharks swam off to lead a normal shark life.

Watch these amazing sea creatures in the video below!

Because of YOUR support, GreaterGood.org’s Project Peril program can support organizations like WCS, who work tirelessly to arrest and prosecute wildlife criminals, saving not only sharks, but other marine animals like manta rays, seashells, and sea turtles.

To save these incredible creatures, and help our oceans at the same time, check out the information below!

Sharks have been one of the top predators in the oceans for over 4 million years. Yet, overfishing and illegal fishing for their fins—used to make expensive Asian shark fin soup.

An estimated 25% of all sharks and rays are threatened with extinction and millions are killed annually.

Claire is a California native now living in Arizona with a background in sustainability and community resilience. Whenever possible, she spends her free time hiking (when not melting from the heat), making art out of trash, yoga, and eating tacos.
Whizzco