They Stumbled Across A Spider Eating An Entire Possum, And The Pictures Are Terrifying

For many people, spiders are the stuff of nightmares.

While some people might flee when they spot a spider the size of a dinner plate, people familiar with them (like those who live in Tasmania and Australia) may just shrug and move about their business. Others may decide to help them out so they aren’t killed by people out of blind fear.

Others, like the couple in this story, decide to share scary photos of it on social media so everyone else can be freaked out.

Justine Latton’s husband and a friend were visiting Mount Field in Tasmania when they stumbled upon an unexpected guest. They were in the process of mending a door at an old ski lodge in Mount Field National Park when they saw the large creature above their heads.

It was a Huntsman spider. They’d seen them before, as they’re common in Tasmania.

However, this one had a small marsupial clamped in its fangs. 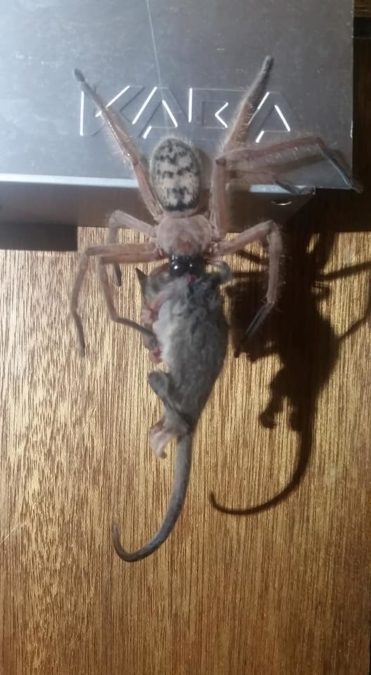 The spider was less than a foot away from the men and feasting on a pygmy possum.

If someone asked you, “What do spiders eat?” you’d probably say moths and flies and other bugs — creatures that you’ve likely seen stuck in spiders’ sticky webs before.

And that’s true of the Huntsman spider, too — they like insects as much as any other spider. They just also happen to snack on small mammals from time to time.

And they don’t weave webs to catch their pray. No, they actively hunt down their prey, then swiftly bite into them and eventually immobilize them with the venom in their fangs.

Everyone’s gotta eat, but seeing this animal clamped in the the grasp of this humongous spider is terrifying.

So it helps to put it in context. Pygmy possums are small creatures. Latton told The Washington Post that the pygmy possum in this photo is only “about the size of a large walnut.” 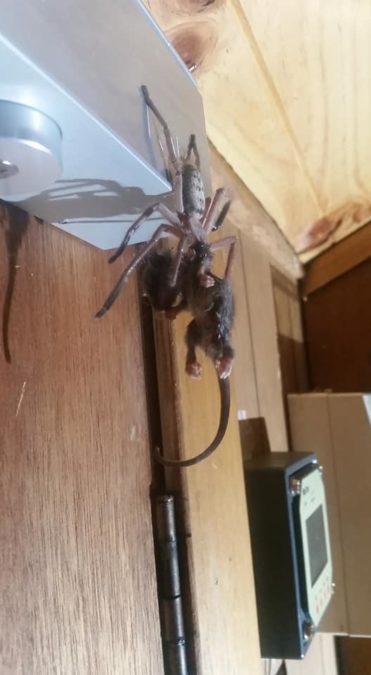 Latton posted the photos to the Tasmanian Insects and Spiders Facebook page and it gathered a lot of attention.

People were horrified, awestruck, delighted, and freaked out.

This is the point where we assure you that Huntsman spiders are harmless to people, in case you didn’t know. Whew!

It’s also important to note that the spider was safely relocated outdoors and not harmed after these photos were taken. He continued to eat his dead meal unbothered.

I’m a little worried about falling asleep tonight, I’m not gonna lie. Knowing the Huntsman is harmless is all well and good, but knowing that and believing that are two different things!

Share this story with anyone in your life who wants a good fright or is really into spiders. They’ll dig it.