Hundreds Of Escaped Goats Roamed The Streets Of California

I think we all now understand social distancing, but apparently, nobody told the goats about it.

It happened in San Jose, California on Tuesday when a witness saw a very strange sight outside. Some 200 goats were loose and roaming through the streets in the area. It seems as if they had escaped from a fenced-in area nearby and had to be wrangled to safety.

The situation was captured on video by Zach Roelands, who posted it on Twitter and then added the caption: “I’m dead 😂☠ When I got back from the store all the goats had broken through the fence and were recking [sic] havoc on our street.” 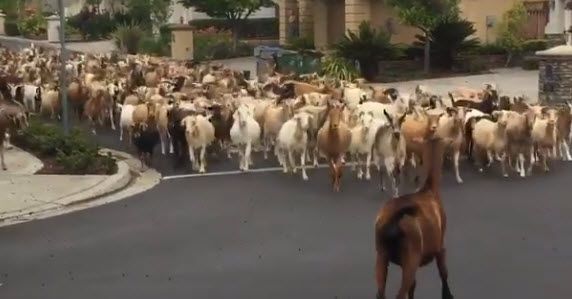 He added: “This is the craziest thing to happen all quarantine

Zach’s father, Terry Roelands spoke to KNTV and said that they use goats every once in a while to clear the land since the hill near their home caught fire about 15 years ago.

This is the craziest thing to happen all quarantine 🐐🐐🐐 pic.twitter.com/Hc7XpuiBdT

It seems as if one of the goats may have broken through the fence when trying to eat flowers on the other side. It wasn’t long before other goats were pushing against the fence and it eventually broke.

KNTV reported that a rancher directed the herd back to the property within minutes. In the video, you see the animals roaming around through driveways and eating flowers out of flowerbeds as both dogs and humans keep them from going too far.

Issaquah, Washington saw something similar happen last summer with goats running down residential streets in the area. Vegetation was being cleared by about 250 of those animals in a nearby forest when they escaped and wandered through the neighborhood. They ate any shrubs or grass they could find along the way.

The goats had been hired by a company to come in to clear the vegetation. KING-5 was told by Healing Hooves Natural Vegetation Management that, as of then, “it’s the first and only great escape this year since the herd has been out on the road since May.”