Many species of animals don’t mix well. For example, you would never think about a dog and a wild elk being friends, but it happened.

Not only do they share a friendship, but they also share a lot of fun as well.

It happened at a Colorado Parks and Wildlife officer’s home. For the past few years, a herd of elk has been visiting the area and one of them has befriended Trygge, the dog. It’s always amazing to see the elf in the area but the dog decided to take things to the next level. 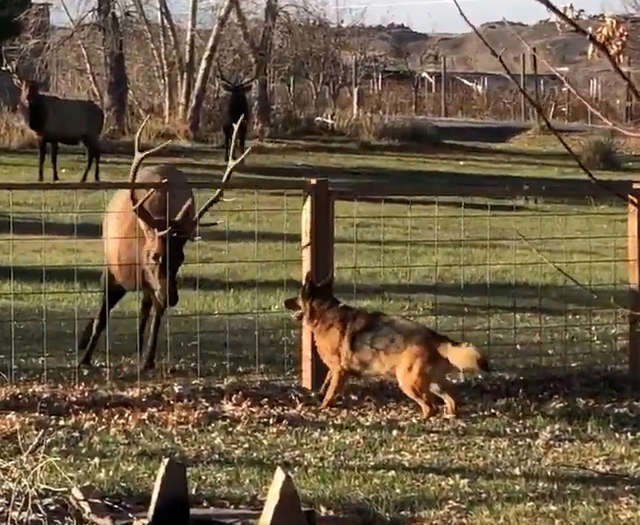 Trygge is a very friendly dog so it wasn’t a surprise when he became buddies with the herd’s leader, a large bull elk. It wasn’t long before they had their own games they were playing.

You can see them in this video during a recent visit:

WATCH amazing video of a bull elk and German shepherd chasing each other playfully along a fence. They seem to know everyone needs to get out and enjoy the Colorado outdoors. This elk and dog have been playing for years, as witnessed by an @COParksWildlife officer. #wildlife pic.twitter.com/nVGcGhDqg6

Trygge and his large antlered friend appear to be playing a game of tag. They run up and down the fence line chasing each other.

Only those two know what the official rules of the game are but they do seem to have fun and the entire game is safe for both.

“They never seem to get aggressive with each other,” Bill Vogrin, spokesperson for Colorado Parks and Wildlife, told The Dodo. “In fact, the bull could easily jump into the yard if it decided to. But they keep their distance across the fence line.”

This is a beautiful friendship and we hope it lasts for many years to come.