Costa Rica is a country that is well-known for its eco-tourism. And for good reason too! The lush countryside is home to some of the world’s cutest jungle creatures such as sloths and ocelots. However, since there is such an influx of tourism, the country’s national tourist board is wanting to make sure visitors know the importance of look, don’t touch.

The Costa Rican Tourism Institute is responsible for the campaign #stopanimalselfies. It comes in response to the ever-growing number of tourists who arrive in Costa Rica seeking the perfect pose for Instagram where they’re posing with wild animals.

The Vice Minister of Costa Rican Ministry of Environment and Energy, Pamela Castillo, said to CNN Travel, “Our visitors must know the negative impact caused by selfies and photos showing direct contact with wild animals.”

Castillo added, “Our goal and responsibility as global leaders in environmental issues is to educate and encourage new world ambassadors committed to wildlife protection.”

Castillo’s agency and the Costa Rican Tourism Institute have partnered together on the initiative.

Besides asking tourists to respect the wild animals while they visit Costa Rica, the two groups are also urging tourists to the country to instead pose with stuffed animals rather than real ones, and use the hashtag #stopanimalselfies along with the caption “I do not mistreat wild animals for a selfie” for their photos. 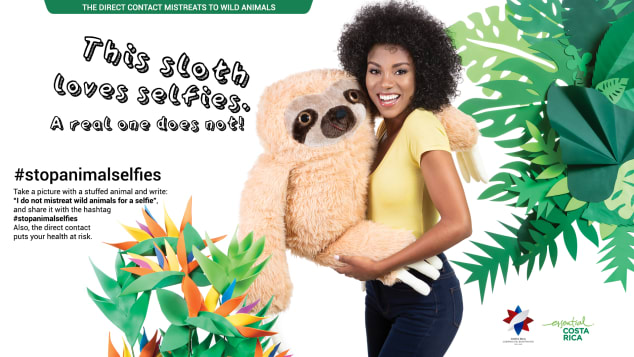 Besides scaring the wild animals – many of whom aren’t used to humans – inter-species interactions can also lead to diseases. This means both animals catching them from humans, as well as humans catching them from animals. For those visitors who do want to interact with live animals on their vacation should seek the alternative, and go through a vetted guide or tourist experience.

In the province of Limon, on the Atlantic coast of Costa Rica, the Sloth Sanctuary’s co-founder Judy Avery-Arroyo educates visitors to the center all about the cute little animals. Tourists from all over the world who come can watch, learn about, and interact with the sloths – however, they cannot pick up the animals. In fact, no one can, except for medical staff.

It’s an ethos that is spreading all across the country as some 1.7 million people visit Costa Rica every year. While Costa Rica’s official language is Spanish, the hashtag #stopanimalselfies is in English as the largest number of tourists to Costa Rica come from the US and Canada.

Costa Rica has been pushing ecotourism big time. In 2019, it was awarded a United Nations Champions of the Earth honor – the organization’s highest environmental award. 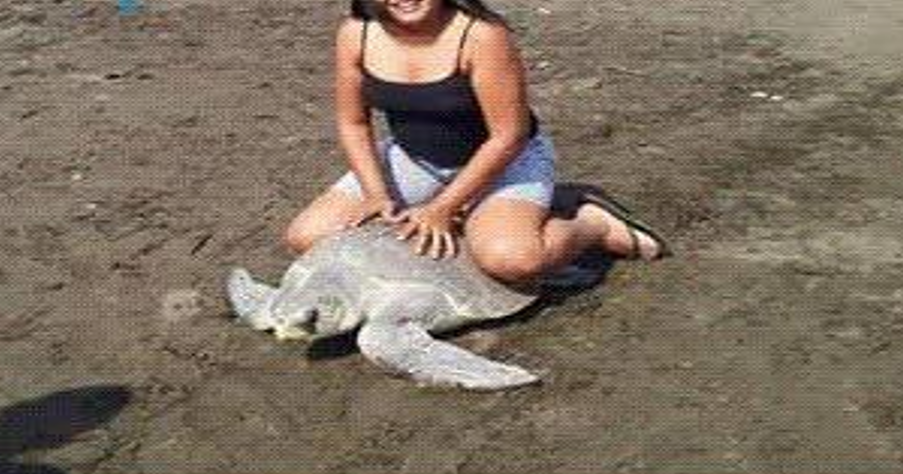 Photo: The photo was allegedly from a woman in Ostional and was going around in FB from 2015-2016 generating controversy in Costa Rica. News.co.cr

The issue of animal selfies isn’t a problem just isolated to Costa Rica.

Visitors to Maria Island situated off Tasmania in Australia, are being asked to sign pledges that promise they will not “chase you with my selfie stick, or get too close to your babies. I will not surround you, or try and pick you up. I will make sure I don’t leave rubbish or food from my morning tea.”

The pledge, which park rangers on Maria Island began to post and distribute in January 2019, arose out of a crisis with too many tourists being unable to resist hugging and squeezing the adorable marsupials.

“We’re in the age of the selfie, and people want to take selfies in different locations and with people and animals,” John Fitzgerald, the CEO of Tasmania Tourism, stated to CNN Travel.

Sounds like the wombats might be in need of their trending hashtag too. I’m curious, when will people just learn to appreciate nature without needing to touch everything for a selfie?