It has been more than a century since the last brown bear was seen in the National Park, but now one has been spotted.

The footage was posted online over the weekend showing a brown bear in the Natural Park O Invernadeiro in northern Spain. The park is near the Portuguese border. The animal was spotted during the day, sniffing around in a grassy area, and at night, standing up scratching its back against a tree. 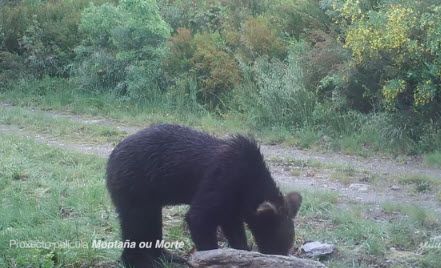 The company released a statement about the cameras that were used. Apparently, they were documenting the action of a young male bear two years ago when the cameras were set up. That bear is believed to be between 3 and 5 years of age.

According to a statement in USA Today: “For us, it is a joy that luck, added to the effort of our team and, above all, to the invaluable involvement of the environmental agents of the O Invernadeiro Natural Park, has brought us such an exciting and motivating result as this.”

We've found this amazing bear developing our next project MOUNTAIN OR DEATH by @peladelalamo 🎥https://t.co/LOXASXz2kE

It seems as if those brown bears may just be able to make a new home in the park for themselves.

According to an interview on CNN with the production company: “After years of conservation work the O Invernadeiro protected area has become a suitable habitat for brown bears.”

Wildlife rangers are advisors on the film and they feel that the bear may have been around since winter.

Since the project began three years ago, there have been numerous wild animals spotted. CNN reported that the director, Pela del Alamo said: “there had never been a bear sighting” during that time.

“It was a chance discovery,” the filmmaker added.

The population of brown bears in Spain was thought to be around 60-70 at one time but the Wilderness Society is now reporting that there may be around 350.