As a wildlife photographer, George Turner has seen his fair share of black cats. In a recent encounter, however, it turned out to be something he would have never expected.

The cat is absolutely beautiful but he is also extremely rare. In fact, he may be one-of-a-kind. 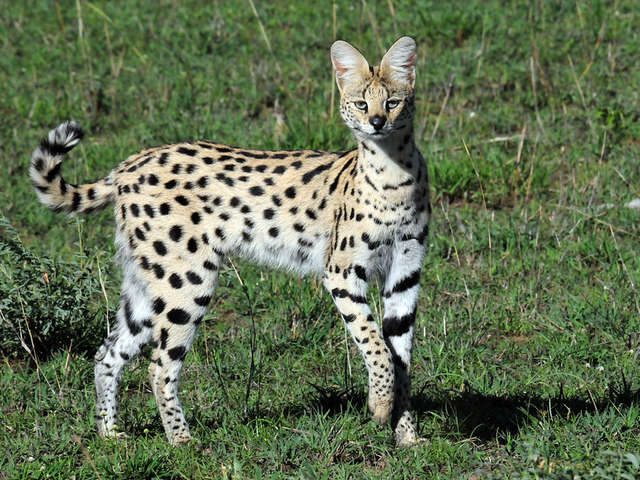 When Turner photographed the Serval in Tanzania, however, something very different showed up on film.

“Can’t describe how mind-blowing this was … and still is,” Turner wrote online.

The wildcat was not spotted like other Servals, he was all black.

The black serval. Can't describe how mind-blowing this was… and still is.⁣ ⁣ For context, even seeing a “normal” serval is tough. They’re shy, secretive cats that tend to live in tall grasses — the perfect combination for staying unnoticed. Every time I’ve been privileged enough to see them, my heart skips a beat. ⁣ ⁣ Melanism (increased development of the dark-coloured pigment melanin in skin/hair) in servals primarily occurs in East Africa, particularly in the highland regions over 2000m, which is what makes this sighting particularly special. ⁣ ⁣ At around 1000m, the Namiri Plains, Tanzania, are considerably "lower" than the normal altitude were melanism is more prevalent. It's likely this particular serval travelled from the nearby – and much higher – Ngorongoro Crater and established a new territory. ⁣ ⁣ Nobody *really* knows why melanism occurs in servals. Some think the increased altitude (and forested habitat that comes with it) reduces exposure to daylight, encouraging melanism. ⁣ ⁣ There’s no guarantee that “Manja” (named after the guide at @asiliaafrica who first spotted him), should he find a mate, will produce melanistic kittens. As melanism is carried by a recessive gene, it could be years before any begin appearing in the area. The hope, for now, is that he continues to flourish in the grasslands and build on his territory. Also, what serval could resist those charming good looks?!⁣ ⁣ [D5, 500mm f/4]

It is thought that the all-black Serval has a condition, known as melanism. That condition causes dark pigmentation in the skin and fur of an animal. This type of wildcat is already beautiful but the pigmentation makes him even more beautiful.

Even though Turner is an experienced wildlife photographer, he had never seen a cat like this.

“For context, even seeing a ‘normal’ serval is tough,” he wrote. “They’re shy, secretive cats that tend to live in tall grasses – the perfect combination for staying unnoticed. Every time I’ve been privileged enough to see them, my heart skips a beat.”

Despite the fact that the feline is different, he does appear to be healthy. Turner could only get one picture before the cat disappeared into the brush. Even though he is gone, however, he will be forgotten quickly.

“The hope, for now, is that he continues to flourish in the grasslands and build on his territory,” Turner wrote, optimistic the cat’s chances at finding a mate: “What serval could resist those charming good looks?!”